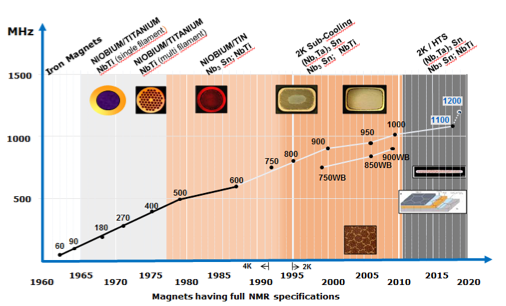 Figure 1. History of NMR B0 field along with technological milestones (courtesy of Bruker Biospin).

Over the past several decades, nuclear magnetic resonance (NMR) spectroscopy has made many seminal contributions to the understanding of matter in both solution and the solid state with applications in physics, chemistry, biochemistry, medicine, environmental sciences, food sciences, and many other disciplines.1-3 NMR is the only technique that is both non-destructive and provides atomic resolution data on the composition, 2D and 3D structure, dynamics, and interactions for a myriad of systems ranging from complex small molecule mixtures and biomolecular complexes in solution, to mesoscopic protein fibrils and heterogeneous bulk matter such as functioning batteries. NMR does not require the presence of optically active reporter groups, chemical spin-labels, or long-range (crystalline) order. It permits systems to be studied under a wide range of conditions, including physiological conditions for biological samples, low or high temperature, and high pressure.4 The only prerequisite is the presence of NMR-active isotopes, which exist for almost all elements in the periodic table. A substantial portion of our knowledge about the structure and dynamics of molecules, materials, and their assemblies into larger entities, including living organisms, stems from NMR and its sister technology, magnetic resonance imaging (MRI). Many important achievements in magnetic resonance are widely recognized, with multiple Nobel Prizes including Rabi (Physics, 1944), Bloch and Purcell (Physics, 1952), Ernst (Chemistry, 1991), Wüthrich (Chemistry, 2002), and Lauterbur and Mansfield (Medicine, 2003). Several other Nobel laureates also made significant contributions to NMR, including Ramsey, Bloembergen, van Vleck, and Karplus.

Electromagnetic radiation in the radio-frequency range can penetrate most materials and samples in a non-destructive manner providing extraordinary versatility and a unique view inside an intact microscopic world. One limitation of NMR is an inherently lower sensitivity compared to spectroscopies that operate at much higher frequencies. Therefore, many key advancements in NMR technology have been intimately connected to improvements in sensitivity, such as the introduction of Fourier transform NMR,3 cryogenic probes,5 and dynamic nuclear polarization (DNP).6 Because many samples can give rise to large numbers of resonances, the other key consideration in NMR is optimal spectral resolution.

The single most important NMR component that boosts both sensitivity and resolution is the external static magnetic field, B0. In NMR, B0 is usually expressed in terms of the 1H resonance frequency (in Hz), v0 = -γB0/(2π), where γ is the isotope- specific gyromagnetic ratio (100 MHz corresponds to 2.33 Tesla). For most spin ½ nuclei (e.g., 1H, 13C, 15N, 29Si, 31P) the sensitivity or signal-to-noise ratio (S/N) scales roughly with B03/2, provided that transverse R2 relaxation is B0-field independent, which is the case when the dominant spin-relaxation mechanism is the magnetic dipole-dipole interaction. This translates into a reduction in NMR time through co-addition of scans that scales with B03. For example, at 1.2 GHz the total measurement time is reduced by about a factor of 2.8 when compared to 850 MHz (the highest field currently available at OSU/CCIC NMR). Moreover, spectral resolution scales linearly with v0 along each frequency dimension, i.e., for an N-dimensional (ND) NMR experiment, the effective gain in resolution scales roughly with v0N, which translates into resolution enhancements of factors of 1.4 (1D), 2.0 (2D), 2.8 (3D), and 4.0 (4D). These enhancements in both sensitivity and resolution are substantial (comparable to the improvements seen between 750 vs. 500 MHz instruments, see Science Drivers), thereby permitting fundamentally new scientific questions to be addressed. For quadrupolar nuclei (I > ½), the gain in resolution as a function of external static magnetic field is even larger, which will be especially critical for many applications to materials research.

The central role of the magnetic field strength, B0, for NMR has led to the development of new NMR hardware with a steady increase of B0 over time (Figure 1) and has remained one of the most important enablers of new NMR science. Historically, introduction of low-temperature superconducting (LTS) magnets with NbTi coils in the 1960s led to a field increase over powered iron magnets from 100 MHz to ~200 MHz and continued to increase rapidly to 500 MHz in 1979 where it remained stagnant for almost a decade. With the introduction of Nb3Sn LTS coils, NMR experienced the next boost of magnetic field strengths, initially to 600 MHz (1987) and gradually to 800 MHz in (1995). Additional sub-cooling of the coil from liquid helium temperature at 4.2 K to 2 K resulted in the first 900 MHz magnet in 2000. It took a full 6 years for the next 50 MHz and ~10 years to produce a persistent 1 GHz magnet (2010), which is still the highest commercially available field strength today. This slow-down of progress, due to inherent limitations of the LTS technology, has been accompanied by a steep increase in cost: from 850 MHz upward, each 50 MHz increment nearly doubled the magnet costs.

Stronger magnets currently do exist, such as the 35.2 Tesla (1.5 GHz) Series Connected Hybrid Magnet at the National High Magnetic Field Laboratory (NHMFL) in Tallahassee, FL.7 However, as a partially resistive magnet, its continuous operation time is too short and field-uniformity (~1 ppm) too low for most applications envisioned here, which require ~0.3 ppb field-uniformity and 24/7 operation mode. 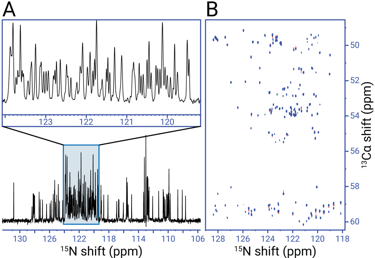 Fortunately, the recent development of high-temperature or high-Tc superconductors (HTS) has opened exciting new possibilities for persistent superconducting NMR magnets at ultrahigh field. YBCO (yttrium barium copper oxide) and related HTS materials can sustain remarkably high current densities surpassing those of LTS materials. In particular, the combination of an LTS superconductor on the outside and an HTS insert connected by joints promises a revolution in ultrahigh field magnet technology similar to the advances made in the 1970 and 1990s. Most recently, Bruker Biospin has introduced a stable, hybrid LTS/HTS system operating at 1.1 GHz complete with console and solution and solid-state NMR probes (this major milestone in magnet technology was officially announced at the 60thExperimental NMR Conference in April 2019). Moreover, a 1.2 GHz magnet based on the same technology has most recently reached field and is now in the final stages of production (Figure 2). In Figure 3 we show representative 1D and 2D NMR spectra recorded on the 1.1 GHz instrument for the intrinsically disordered 140 amino acid protein, ∝-synuclein, which illustrate excellent system performance and clearly demonstrate the promise of NMR at ultrahigh fields.

These latest hybrid LTS/HTS ultrahigh field magnets represent a quantum leap over the current top range of 800 – 950 MHz NMRs available at numerous centers in the US. Although no >1 GHz NMR has been delivered yet, nine 1.2 GHz instruments have been ordered to date by academic institutions in Europe (five in Germany and one each in Italy, France, Switzerland, and the Netherlands), but none in the US. It is imperative for scientists in the US to have access to 1.2 GHz technology as illustrated by the science drivers below. However, due to the price tag of these ultrahigh field magnets and the infrastructure required, only a small number of NMR centers will be able to accommodate such systems. Here we propose to acquire a 1.2 GHz NMR system with state-of-the-art capabilities for both solution and solid-state NMR. As the flagship instrument of the new “National Gateway Ultrahigh Field NMR Center”, this acquisition will serve a diverse and interdisciplinary regional and national user base.